On Monday, we discussed certifications: Geographical Indicator (GI), Protected Geographical Indication (PGI), Protected Designation of Origin (PDO), Fair Trade etc. labels and certifications… are they that important? Their main use is for profits, and the average consumer doesn’t pay that much attention, but it can also raise the awareness/profile of otherwise unknown artisan foods and culinary traditions.

This then can be exploited as in the case of the tequila industry in Mexico. It was there that terroir was once the focus with GI, but when the market got big, the major players took over and volume took precedence over the provenance of what they were producing.

Tim Bailey, from Acoura, a company that helps those in the food business obtain and keep food certifications, told us about the various certifications we find on food labels in the UK and what his company does to ensure standards are being met. 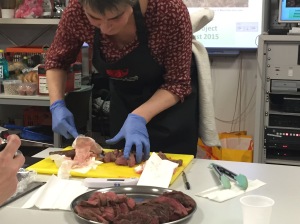 We ended our day with fellow gastronomer, Lesley Gillespie, who guided us through a venison tasting and spoke about her dissertation project which focused on deer consumption in Scotland. We blind tasted wild Red Deer, farmed Red Deer, Roe Deer, and Sika Deer. The Sika was my favorite as well as many others, and the Roe was a close second.

On Tuesday, we discussed TV chefs and programming and had another gastronomer, Kevin Geddes visit and discuss one of the first British celebrity chefs, Fanny Cradock, and his blog Keep Calm and Fanny On.

In the afternoon, we discussed food documentaries and how effective and factual they were; distortion and exaggeration seem to be a common theme in many food docs.

On Saturday, a few of us went to a screening of The Chocolate Case being shown at the Glasgow Film Festival. A group of Dutch journalists went on a pursuit to find a slave-free chocolate bar and ultimately ended up making their own.

On Monday, representatives from Food Standards Scotland (FSS) and Global Justice Now both paid us a visit. The guest speaker from Global Justice Now spoke about food issues they’ve campaigned for, the most recent being the EU renewal of allowing Roundup weed killer (a Monsanto product) to be sold in Europe, which has been shortened from several years to just 18 months to be reviewed again thanks to their lobbying efforts.

In the afternoon, Elspeth MacDonald, the Deputy Chief Executive at Food Standards Scotland spoke to us about the organization’s efforts to keep food safe and food-borne illnesses at bay. She also expressed their desire to help Scotland to eat a healthier diet. We (of course) had to ask about the Errington Cheese case to get FSS’s side of the story, to which she told us that the information that the Erringtons wanted, specifically the test results from those who fell ill weren’t FSS’s to give, but rather another Scottish governmental agency and that they’ve been as transparent as they can be throughout this case. As you may know, some people may disagree.

On Tuesday, investigative Alex Renton spoke to us about food journalism. He discussed media coverage of food and food issues; many of us agreed that a lot more can be done in regards to covering food, moving past all of the paid-for content that largely glorifies unhealthy eating and focusing on investigating the food industry and really taking them to task.

Unfortunately, I missed Monday’s class due to another commitment, but that day covered supermarkets and journalist/author Joanna Blythman paid a visit (I’ve previously mentioned her and her involvement in the CDAF)

Tuesday, we discussed the role (or roll ;)) of social media in food communication and whether it had a positive or negative effect on our dining experiences and overall consumption. As someone who shamelessly takes photos of dishes in restaurants, I do side with the argument that taking and posting photos of food in restaurants before eating is a digital scrapbook of sorts that heightens the overall experience of the meal… plus, I’m not that bad, my technique is usually a couple of quick stealthy shots like a food paparazzo.

Please forgive me for the delay, I’ve had a very busy and exciting past week and a half, as well as a pretty heavy workload with projects and reading for the current modules.

5 thoughts on “All Isn’t Fair in Trade and Labeling”