This past week of class was exhausting. Two long days; one in the classroom with a lot of interesting, and frankly, depressing information thrown at us, and the other enjoying a taste of fine dining as well as a peek into what goes on behind the scenes and the communication involved, all seen through a critical gastronomic lens.

Monday was all about fish and seafood, more specifically centered around the current global and UK/Scottish fishing system and its sustainability.

After a morning of learning the basics about fisheries, aquaculture, the laws, and conservation measures being taken (or not taken), Jess Sparks paid a visit from Seafish, a non-departmental public body; in other words, a semi-autonomous organization funded by a levy that all seafood products that are first sold in the UK. He explained that the Scottish fishing industry is comprised of four different industries within it: Whitefish (haddock/cod), Inshore (shellfish/crab), Pelagic (herring/mackerel), and Aquaculture, or fish farming (salmon/mussels).

In 2015, the Scottish fishing fleet caught 440,000 tonnes (tons) of fish/shellfish, valued at just over £437 million (Over half a billion US dollars), pretty impressive for a nation of Scotland’s size. Jess then took us through various types of fish found in Scottish catches as well as the management of fishing grounds to keep stocks from being completely depleted. We discussed the MSC, or Marine Stewardship Council label found on certain fish and seafood products. A packaged fish or other seafood product with the MSC label on it indicates a responsibly caught fish and traceability right back to the source.

And before ending his talk, the impact of Brexit was mentioned. Currently, the EU’s Common Fisheries Policy (CFP) allows members to fish in other members’ waters. For example, the Spanish fleet does a lot of its fishing in Scottish waters and is legally allowed to under the current policy. With the UK leaving the EU, this complicates things a whole lot. A whole new set of policies and regulations could be created, but that will take a lot of time, so it is likely that the UK will go the way of Greenland with an Economic Exclusion Zone (EEZ), that allows the UK (including Scotland) to continue trade and participation in the EU fisheries system. Did I lose you yet?

Suffice it to say, Jess wasn’t shellfish sharing with us what he knew….did you sea what I did there? (Sorry, I can’t resist a good pun)

Howard Wood, co-founder and Chairman of the Community of Arran Seabed Trust (COAST) and founder of SIFT (Sustainable Inshore Fisheries Trust), then spoke of his and the local community’s ongoing efforts on the Isle of Arran to protect coastal seabeds from destruction from scallop dredging and bottom trawling (both methods horribly brutal to marine habitats).

It was heartening to hear and see a community not only passionate about protecting its marine life and coastline but actively pressuring and getting the government to start doing its part. After an almost 15-year fight, Lamlash Bay on the Isle of Arran became the first community managed No Take Zone (NTZ) for fisheries, and a large area of sea around the southern part of the island became a designated Marine Protected Area (MPA).

It was a particularly passionate and emotional talk, with Howard himself getting choked up when discussing being honored with the Goldman Environmental Prize, a prize awarded annually to grassroots environmental activists for their efforts. A fellow recipient and friend of his, Berta Cáceres, was murdered in her native Honduras, most likely as a result of her activism that halted a massive dam project that would cut off the water supply to the native Lenca people in Honduras.

At the end of his talk, Howard said that although it may seem daunting to fight the big guys, with individual and community-led action, change can and will happen.

A complete 180, from Monday’s lecture,  Tuesday was a much lighter, but just as interesting day of class; it was restaurant day.

We started our restaurant day in Leith at Ostara Cafe, owned by a fellow gastronomer, David McVey. Over scones and tea, we had a quick chat and introduction to food communications in and around restaurants.

After a short (and muddy) walk along the Water of Leith, we arrived at Restaurant Martin Wishart, where we spent the majority of our day. 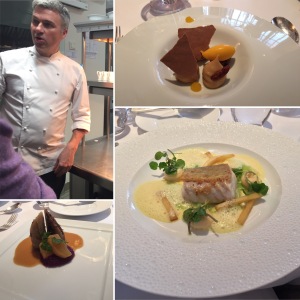 From tasting the wines that would be paired with our lunch, to watching the kitchen staff in action and speaking with Martin Wishart himself about the restaurant (I found out that he’s not big on culinary trends), it was a special inside look at fine dining and communication’s role in delivering a specific experience to the diner.

As seen and tasted throughout our meal, the restaurant boasts dishes made with high-quality Scottish ingredients cooked with French techniques. 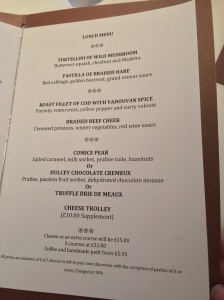 Another important aspect of a Michelin-starred establishment is the service. From the placement of utensils and glassware to the timing of each course, the meal was a finely choreographed performance, a fine dining ballet if you will.

Four hours and several courses later, we bid adieu to RMW and took a short walk to another fine dining establishment: Norn.

A bit of a departure from traditional establishments like Martin Wishart (but just as pricey), Norn takes a more casual approach to the fine dining experience. The name “Norn,” is the name of an extinct language that used to be spoken up in Orkney and Shetland. 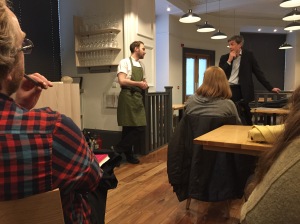 Chef and co-owner Scott Smith explained this casual approach, by pointing out the minimalist decor and seating, the earth-toned ceramic dishes and bowls, and the open kitchen; he said the food was the main focus and wanted nothing to distract the diner from it.

Scott prides himself and the restaurant on only using seasonal Scottish ingredients, so seasonal, that the menu changes regularly (at least one a week). And speaking of a menu, he doesn’t want you to look at it. Diners are requested to not look at the printed menu during their meal in order to fully experience each dish with no expectations or ideas of what they’re going to eat.

He also proudly tells us that Norn bakes the only whole beremeal bread in the world and the restaurant makes 100% of their own butter to which he kindly allowed us to try after our chat.

I am always hungry.

Hungry for a great meal, a great story, a great adventure; I live for the next bite.

Here on The Encyclofeedia, I aim to help others eat and think healthier, as well as take you along on my food-related travels.