March 20 and March 21
Class on Monday was focused on impacts of the system, including issues like slavery, child labour, exploitation of workers, and land grabbing. I took a closer look at land grabbing and was amazed (but sadly not shocked) at the vast amount of land that foreign governments and corporations have bought up in Africa and South America; 31 million hectares (77 million acres) since 2000 has been bought up by overseas investors, with almost half being in African countries like Sudan.

Sue Whittle from Compassion in World Farming, spoke to us about animal welfare, and the organisation’s mission to get rid of factory farming, a very admirable but idealistic campaign in my opinion.

We also spoke about alternative food networks, and what could be labeled as one (farmers markets, organic/fair-trade, etc.?). A former gastronomy student, Will Bain, spoke about his dissertation concerning consumer sovereignty, specifically in food assemblies, that ultimately led to his cofounding of the Leith Food Assembly in Edinburgh. For those of you outside of Europe, a food assembly is essentially a digital farmers market, where one can buy local produce, meat, bread etc., online and go to a designated place to pick up said items on a weekly basis.

On Tuesday, we spoke about food campaigns and the effectiveness of various methods that have been used to raise awareness about various issues. Stewart Fitzpatrick from 38 Degrees spoke to us about his involvement in digital campaigns and what works to engage people and what doesn’t.

March 27 and March 28
Monday, Pete Smith, Professor of Soils and Global Change at the University of Aberdeen, paid us a visit and spoke about the externalities (or consequences of industry activity that isn’t reflected in market prices) of the food system, specifically the impact the industry has on the environment.

On Tuesday, we spoke about food in film and spent the morning watching a selection of clips we all submitted for class viewing…I sent in a few clips including the infamous (and a bit unsavory) brain eating scene from Hannibal as well as one from one of my all-time favorite movies, The Goonies. 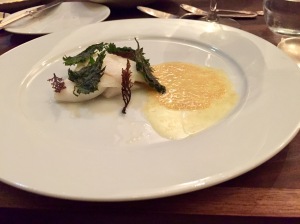 Then on Thursday, a group of us attended a dinner at the Edinburgh Food Studio, a really interesting research hub and culinary collaborative that regularly holds a series of dinners with guest chefs. Chefs John Demetrios and Ian Doyle from 2* Michelin restaurant Oaxen Krog in Stockholm, took us on a wonderfully delicious, plate-licking worthy culinary journey to Sweden (via Scotland). 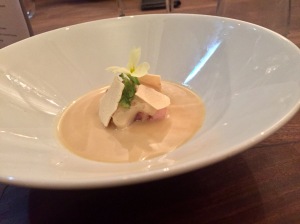 My favorite dish of the night was a poached wild halibut with fried nettles and pepper dulce (a tasty seaweed), and a brown butter sauce with vendace roe. Also, the dessert, reminiscent of apple pie a la mode but with rhubarb, had a delicious caramelized whey butter called Messmör (just another excuse to take a trip to Sweden, I think). 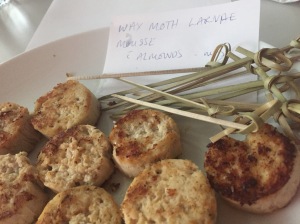 On Monday, we discussed a bit more the impacts of internalities and externalities on the food system. We also looked at what some are describing as ‘the answer’ to fulfilling the growing global population’s dietary needs, specifically protein: bugs. Ben Reade from Edinburgh Food Studio spoke to us more on entomophagy (the study of the practice of eating bugs) while former gastronomy student Philippa Marsden whipped up some buggy snacks to try… suffice it to say, I don’t think insects will be my new source of protein anytime soon.

At the end of the discussion, many of us had agreed that this attempt by large companies to market bugs as a replacement protein source would likely hurt communities that eat and depend on bugs as a part of their diet, seeing as it could go the way of other foods that became traded commodities (i.e. quinoa and farmers in the Andes degrading their soils to keep up with global demand) and make it exorbitantly expensive to eat.

On Tuesday, Julian Baggini spent the day with us discussing his book The Virtues of the Table (allegedly philosopher Emmanual Kant died from eating too much cheddar cheese… not a bad way to go I think), his thoughts on philosophy and food, and creative food communications.

Friday, a few of us attended a really interesting panel on technology and its role in the future of the food system (for good and for bad) at the Edinburgh Science Festival. One of our lecturers, Charlotte Maberly, was the host and former gastronomy student Scott Fraser (you may remember him from our visit to Dawnfresh last semester) was on the panel along with Jonathan Lodge, CEO of City Farming Systems and Fergus Walker, chair of Common Good Food. 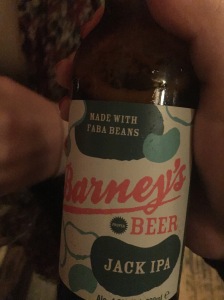 Enjoyed this post-panel fava bean IPA made for the science festival.

This week marks the week of last classes for our program (crazy!). We then have a 4000-word food sovereignty paper and food communications presentation at the end of this month and a ‘wee’ break in the beginning of May before diving head first into dissertations.