Fall is the time of year when “basics” like me rejoice for the return of pumpkin and pumpkin spiced items. From candles to lattes, the orange gourd has become the unofficial mascot of the Autumn season. (Let’s just say it’s gourd to be a pumpkin.)

With the rise of the pumpkin, comes a plethora of related products. To help you sift through some it, I went to Trader Joe’s, the mecca for pumpkin/pumpkin spice fanatics, to try some (okay, most) of their offerings. 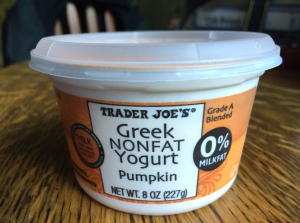 Pumpkin Greek Yogurt ($1.29)
Initial Thoughts: It smells really good, very pumpkin-y. One spoonful in and I want to spit it out. The yogurt has a weird off-putting taste that I can only describe as “pumpkin puke” (If a pumpkin could get sick, it would taste like this).
Conclusion: This yogurt is super gross. It tastes really sour, as if it’s long past its expiration date, but according to the date printed, it’s still “good.” I may have exaggerated when I said I wanted to spit it out… it isn’t completely inedible, but why on earth would you torture your taste buds with this foul-tasting yogurt?
Rating:  Half a pumpkin (out of five)

This Pumpkin Walks Into A Bar – Cereal Bars ($1.99)
Initial Thoughts:  It’s good. Looks and tastes like an apple Nutri-Grain bar; apple and cinnamon flavors are pretty dominant in this cereal bar.
Conclusion: Despite tasting good, it severely lacks pumpkin flavor. I can buy apple cereal bars whenever I want, so when I purchase an item that implies pumpkin is the star ingredient, I kind of want to be able to taste it.
Rating: 2 1/2 pumpkins 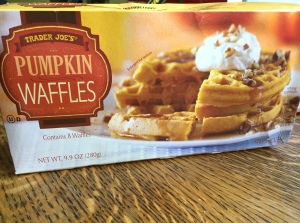 Pumpkin Waffles ($1.99)
Initial Thoughts: They have a great ‘pumpkin’ color and crisp up wonderfully in the toaster, but that’s where the praise for these waffles begins and ends. Upon first bite, there is a very faint taste of pumpkin and typical fall spices. The flavor is so muted, that they should be renamed: “Essence of Pumpkin Waffles.”
Conclusion:  These waffles were what I was looking forward to the most and ended up being a complete letdown, but I must commend Trader Joe’s on their ability to make really light and fluffy, albeit bland waffles.
Rating: 1 pumpkin

Pumpkin Spice Chai ($3.99)
Initial Thoughts: I open the tin and it smells absolutely fantastic. It’s taste? Good-ish…? With each sip, it changes from “I don’t know about this…” to “Okay, it’s not bad.”
Conclusion: The jury is still out on this one; I’m not so sure chai spices and pumpkin work well together (at least in this case).
Rating: 1 pumpkin

Pumpkin Joe-Joe’s ($2.99)
Initial Thoughts: YASSSSSS. The teddy graham-esque cookie and pumpkin flavored cream (that actually tastes like pumpkin!) are really tasty. These cookies would probably be fantastic dipped in a certain hot gourd-centric beverage from a certain coffee chain…
Conclusion: I’ve yet to have a Joe-Joe that didn’t taste good and these certainly do not disappoint. The double-stuffed sized portion of pumpkin cream between the cinnamon graham cookies make these Joe-Joe’s a delicious hit.
Rating: 3 pumpkins 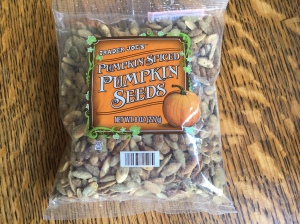 Pumpkin Spiced Pumpkin Seeds ($2.99)
Initial Thoughts: Coated with pumpkin pie spices and a touch of butter (sorry vegans!), these little seeds are addictive. Sweet, but not sickly, these pumpkin spiced pumpkin seeds (a pretty meta snack if you ask me) are reminiscent of the candied nuts you can get from those carts in the city or a stall at the county fair.
Conclusion: Buy these while you can! They’re that good.
Rating: 5 pumpkins 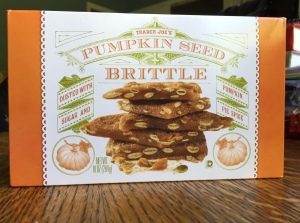 Pumpkin Seed Brittle ($3.49)
Initial Thoughts: Sweet, buttery, nutty, this is a superb brittle. The addition of cardamom adds a nice warmth to it as well.
Conclusion: This brittle is good. It’s so good, you could bring it to Thanksgiving dinner in lieu of a traditional pie (put the brittle in a nice tin and you can pass it off as homemade 😉).
Rating: 4 pumpkins

Have you tried any pumpkin items from Trader Joe’s? What do you think? Let me know in the comments below or tweet @LesleyRozycki, I’d love to hear your thoughts!

I am always hungry.

Hungry for a great meal, a great story, a great adventure; I live for the next bite.

Here on The Encyclofeedia, I aim to help others eat and think healthier, as well as take you along on my food-related travels.